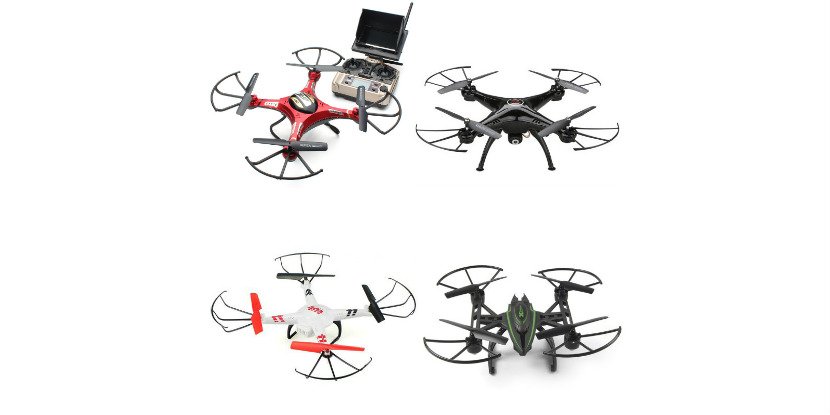 The market of drones is expanding very quickly, there are many new manufacturers with a lot of models. So in this article we are going to see what are the best selling drones in the entry level – from 25 to 79$ – to help you choose what quadcopter better fits your needs and is the best drone for you and your budget. Note that these are drones designed for beginner and intermediate level pilots, if you are an expert you should look for $250+ drones with GPS and more functionalities.

Let’s see the main features drones could have, and briefly explain them: 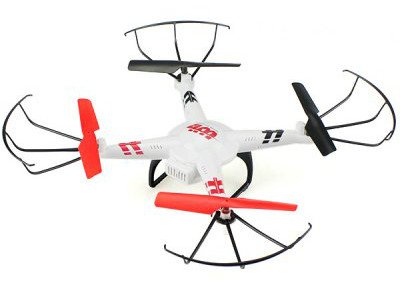 WLtoys V686J is a very cheap drone, but with good features. It has a 2MP camera that can record 720P videos, features headless mode and return to home functions, and 6-axis gyro for better stability.

It has a 2.4G 4CH controller: 2.4G technology for anti-interference, more copters can fly at the same time and will not interfere with each other.
One key to return function makes it easily to find the way home.
Built-in 6 axis gyro, strong stability, easily implement various flight movements, stronger wind resistance, easier to control.
720p high definition 2.0MP camera gives you a great experience to overlook the world from the sky.
Large and lightweight airframe with nice durability and 8.5mm coreless motor.
It is 20x20cm and can fly for 7 minutes with a 3.7V 730 mAh li-battery.
With LED light,  night fly is possible.

This drone is perfect for beginners, it’s easy to fly, small and resistant, with propeller protection, and is very cheap so you don’t have to worry too much in case of crashes. 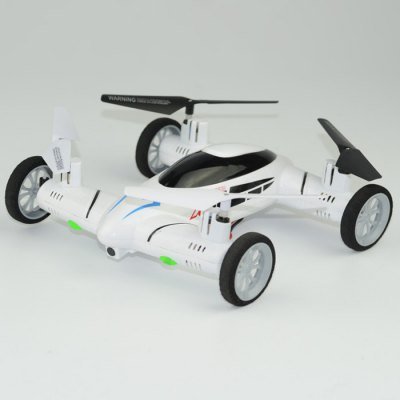 
The Sy X25 is a quadcopter and a RC car in the same time.

It features a 6 axis gyro for sStrong stability, stronger wind resistance, easier to control.
It has a 2.0MP HD camera to capture and record every beautiful and unforgettable moment.
Supports hover function: It can stay firmly in the air.
360 degrees 3D eversion: Professional cool and exquisite flight action.
Speed switch: Fast/medium/slow three speed lever for your choice.
Headless mode: Open this mode, X25 will automatically lock into the take-off direction no matter where it is.
LED light: Suitable for flying in the dark at night, also can increase the visual perception of flight. 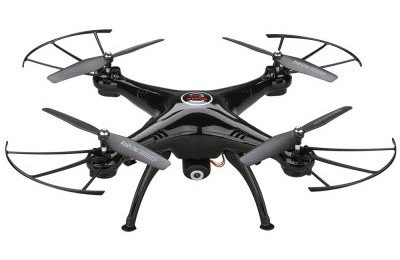 33×33 cm and a flight time of 5-7 minutes with a 3.7V 500mAh battery. It can fly upto a distance of 300m. It weights 121g. Speaking aboute the remote control, users can change the remote with a flip of a switch to allow for left or right hand throttle. For lefties that often have to fly with their right throttle, this is a nice change.

This copter is very agile. You’ll even be able to perform full 360 degree flips with ease. Smaller in size, this copter zips through the air with relative ease, which allows you to quickly combat wind gusts or any obstacles in your way. Hovering is surprisingly easy, which is hard to find even in mid-priced models.

Modular designs are ideal because you can swap out parts quickly and easily. For any beginner, this is great because you can be expected to crash a lot. Heck, even advanced pilots can crash and often do. There are propeller guards included that will protect the propellers in the event you crash and burn. Advanced users will often leave these guards off to reduce the weight and increase flight time.

Perfect for pilots of Intermediate and Beginner Level. The Syma X5HC Quadcopter is the perfect model for beginners. This is not a Phantom and doesn’t claim to be, but at $58, you can’t ask for more. The advanced control technology ensures a further communication distance with the remote and a faster transmission of the signal for faster response time from your drone. 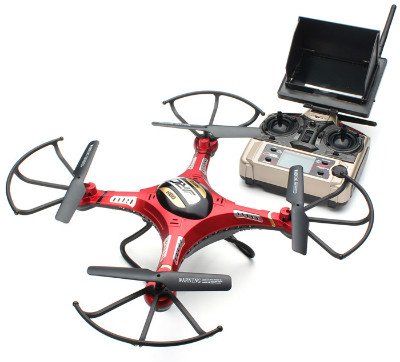 It is equipped with HD 2MP HD camera, to capture and record every unforgettable moment. It can perform 360 degrees 3D eversion, professional cool and excellent flight action. Slightly press the 3D mode key, ascending the quad copter to 2 meters high, and then push the right operation level to the bottom at any direction, the quad copter will roll over for you.

It features one press automatic return, you will never be worry about missing it. Optional headless return mode: Headless return mode is easy to enter or exit, so you can play many tricks with this quadcopter. Designed with colorful LED light, suitable for flying in the dark at night.

Boundless speed variable, this key could adjust the speed of the side fly and forward / backward at your will. Re-adjust the median size to improve the quadcopter’s suspending condition, then your quadcopter will not suspending or deviating too much.

Large capacity battery easy to charge and repalcement, meeting your long flight experience needs without the worry of battery power shortage. Low power security warning: When the battery is insufficient, the led light would turn from constant lighten to flashing. It will largely reduce the possibility of your quadcopter descending on a further or insecure zone.

This is one of the best options for beginners and intermediate that want to try the experience of FPV drones for a low price. 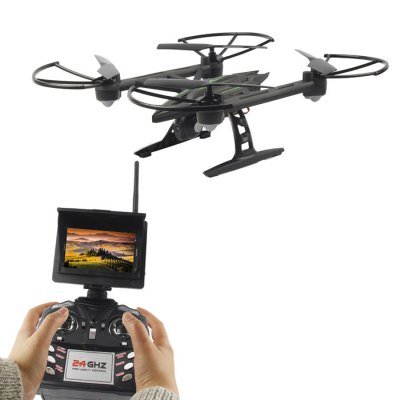 The 510G is actually an advanced toy-grade quadcopter (for its price range) that can take some very impressive videos thanks to its highly stable flight performance.

Camera: It features a 720p camera that can film videos at a resolution of 720p or shoot pictures. The most impressive feature of the 510G is its ability to take reasonably stable aerial videos. Being a sub-$100 toy quadcopter, the 510G’s video performance isn’t exactly in the same league as more expensive aerial photography drones such as the Phantom 3 but within that price range it is probably one of the best, if not the best.

FPV: This drone comes with FPV transmission, that allows real time image transmission with wifi connection between the drone and your controller, that features a real time display.

Headless mode: In headless mode the drone will keep it’s direction no matter the orientation of the drone, completely solving pilot “loss of orientation” problems.

360 degree rollover: Mad about flips and aereal evolutions? This drone automatically make flips when in rollover mode, and can roll up, down, right, 360 degrees. Professional cool and exquisite all-directional rolling.

Altitude hold:The altitude hold feature of this quadcopter makes flying FPV very easy as it automatically maintains a steady altitude without need of pilot input. Altitude hold makes flying a drone so much more easy and this feature is very well implemented in the 510G. To keep its altitude consistent, a barometer in the drone is used to keep track on air pressure. The 510G attempts to keep this air pressure reading consistent by adjusting its propulsion accordingly to compensate for altitude gains or loss.

One key taking off / landing: If you are not a expert pilot, or just think landing and taking off is annoying, just press a button and the drone will do that for you with no worries.

Led lights: The drone is equipped with bright LED ights, making it more beautiful, safe and visible at night. Beside, the head has red lights, and the tail has green lights, so you will always know the direction of the quadcopter.

Structure: Propellers are flexible and can be bend up to 90 degrees, so are restistant from abrasion and crash. Bearer bar is made to resist to crashes too.

Remote control: To make things easier for the pilot, the throttle stick has been configured to be self-centering at 50% which is the level needed to hover the 509W. Moving the 509W up or down is as simple as increasing throttle power or reducing it.

This is a short list of the best budget drones with camera in 2016. Do you have a different quadcopter that you think should be in this list? Write it the comments! 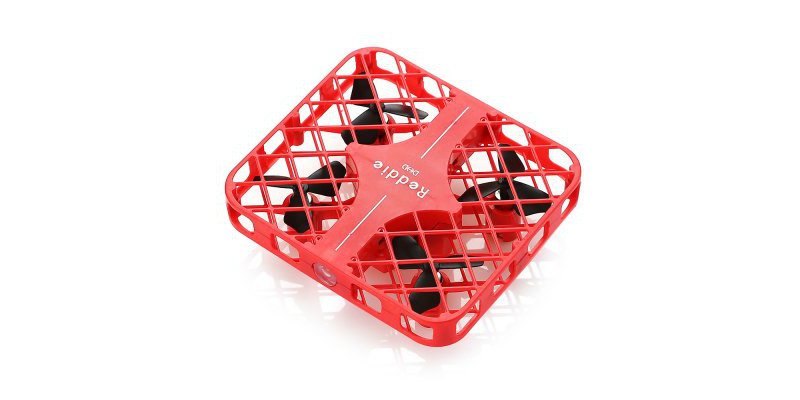