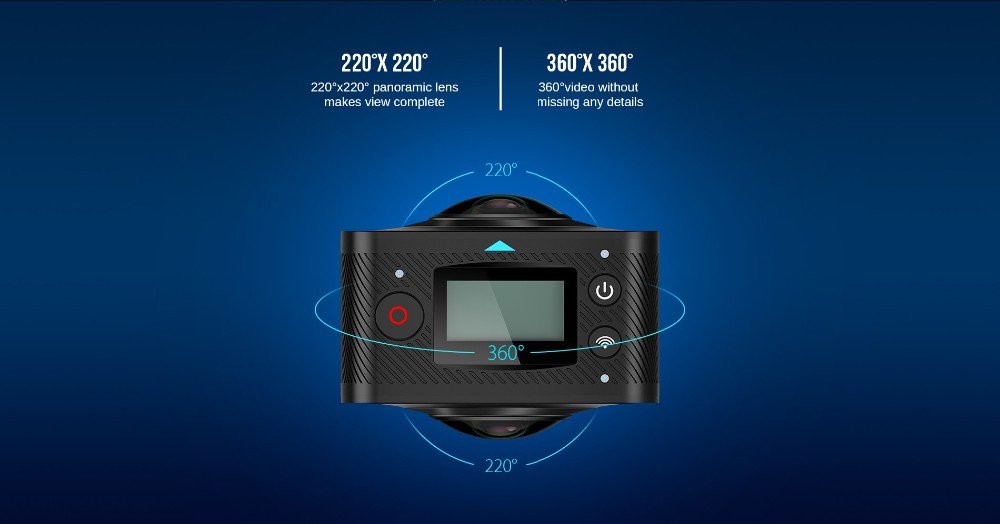 Elecam 360° is the first generation of 360 video WiFi panorama action camera. This action camera comes with dual-camera featuring 360 VR mode and panorama shooting mode. As the name suggests, the EleCam 360 is primarily designed for VR and 360-degree video,  but it works really well also as a standard action cam.

The 220°x220° panoramic lens makes a complete view of the space around you and 360° video allows multi-angle shot. You could check out the video at any angle by manually sliding the cellphone screen after simply connecting the camera to your android or OS phone via app.

Check out these videos, move the mouse around while left-clicking inside the video and see the perspective change. Or if you are using the phone rotate it to change the view.

Elephone features the OV4689 sensor with an f/2.0 lens on either side of the camera shell. The EleCam 360 supports WiFi.

The panorama action camera is compatible with the hottest VR mode,that means you could switch the video shoot by the action camera and recorded on the phone to the left and right video mode,then you can enjoy a virtual reality panorama view

The wifi action camera would lasts for over one hour with front and rear cameras on,furthermore,it is  cleverly designed to accommodate bigger batteries with larger capacity

The unique video panorama action camera is good at recording business meeting to make everyone’s statement count,while it is most suitable for aerial photography,paragliding shooting , skydiving aerial photography, buildings and alpine panorama shooting,making that you enjoy the most exciting amazing all-round experience.

Elecam360° without dead angle, shoots completely different scenery, with an ability of capturing more detailed and high-quality images distinguishing from other normal cameras.

This camera is suitable for many situations such as, surfing, parachute, concert, business conference, and so on. You can shoot photos and videos.

Control the camera via your phone

You can download the app from this QR codes:

Main Features:
Two 220 degrees panoramic lens make the view complete
360 degrees video without missing any details
Video in 2 lens are seamlessly stitched
With VR shooting mode, allows you having an virtual reality experience
Support WiFi connection, supports smartphone connecting to iOS and Android
Support sharing moments to your social network
Built-in 1500mAh Li-ion battery, lasts for over an hour with with front and rear cameras on