This is our full review of SJCAM SJ5000 plus or SJ5000+, cheap FullHD waterproof action camera, evolution of the SJcam SJ4000, with new hardware features including a new 16Mpx image sensor by Panasonic and a new Ambarella A7LS75 processor , the same mounted on GoPro Hero 3+ Black. These features make users happy as they now have the ability to take great 16mpx shots (real, not interpolated as in Sj4000) and to shoot videos at 1080p 60/30fps and 720p 120/60/30fps, making this cam good for slowmotions.

There are 3 different versions of the SJ5000:

Be aware of fake models. If you buy from amazon you are quite sure to have an original one. We remind you that the version marked QUMOX is completely equivalent to the original SJcam, in fact it is the same cam but distributed by Qumox. To update the firmware they use the same updates provided by sjcam.

Beware of fake models! To recognize the original SJ5000+ take a look at the pictures at the top of this article: in the front there are only two small LEDs, the text SJ5000 +, where the presence of the symbol “+” is essential if you want to buy the Plus model, the text SJcam or Qumox, and the lens. There is a version on sale on Ebay and other shops that has a small LCD screen on front, close to the lens, it is a fake! Even the Amkov is similar but not the same thing.

SJ5000+ or SJ4000: Which to choose?
As we will see in the conclusions of this article, the SJ5000+ plus is 60-70$ more expensive than SJ4000 but has a much more efficient and quality hardware equipment, and reaches 1080p 60fps resolution and 16mpx photos with a really performing Panasonic photographic sensor, so our advice is definitely to buy sj5000+ if your budget allows it. If you do not want to spend 150$ or more, you can consider the Xiaomi Yi which has about the same video quality of SJ5000+ and records in 2K, but has no rear screen, doesn’t include any accessory and underwater case (you can buy it for 15$) and it costs just 80$.

Here you can find some videos shot with SJ5000+, wait a few seconds for the page to load, then select the file you prefer and then click on Download, do not watch the streaming file because it is compressed. In the bottom of the article in the Link box you can find more videos!

Here’s a video by geekbuying.com about the unboxing of sj5000+, the menù, how to connect to wifi:

The SJCAM SJ5000+ is a waterproof FullHD action cam that deserves our attention thanks to the new image processor CMOS 16 megapixel Panasonic MN34120PA, which greatly improves the quality of the recordings compared to the SJ4000, with f/2.8 aperture that will allow us to capture Full HD videos at 60 fps, HD 720p at 120 fps and 480p at 240 fps. You can also take pictures up to 4608 x 3456 pixels or 16mpx. The camera includes a dual LED flash to improve our video quality in low light conditions.

Major improvements of SJ5000+, from its predecessor SJ4000, are given by the chip Ambarella A7LS75 , the same mounted on Gopro 3+ Black edition, so the quality of the videos recorded at 1080 at 30-60 fps is better than on SJ4000, with a recording time of 60-80 minutes in Full HD with wifi and screen booth turned off. Perhaps, one of the features that highlight the SJCAM SJ5000 Plus compared to competitors similarly priced (as happened for SJ4000) is that the SJ5000+ has a LiveView screen on its back, allowing to see what’s beeing recorded and move through menus and settings easily, in addition to the wifi , one of the most appreciated feature that allows to see records instantly on our smartphones or cameras using the app, or directly on the screen of the cam. Moreover, as the SJ4000, it has many accessories included, useful on many occasions.

The features of SJCAM SJ5000+ (Plus) are: back 1.5-inch TFT LCD screen with a resolution of 960 x 240 pixels, HDMI output, 900 mAh battery easily replaceable, integrated WiFi , many accessories and hooks, translucent case that allows you to immerse the cam into water up to a depth of 30 meters , a slot for microSD card up to 32 GB.

There is a Drive mode , the cam starts recording automatically when you turn on the car or the motion sensor detects something moving in the field of view of the cam. There’s a wide angle HD lens 170 degrees for spectacular shots in subjective. And there’s the time lapse to take continous photos every few seconds (1, 2, 5, 10, 30 or 60s) and then edit them together to create spectacular videos, for example the clouds that run quickly in the sky or the stars that rotate. There is also the new feature Video Lapse that automatically creates a video with pictures taken every few seconds, so you don’t need to edit anything, the cam makes everything for you without having to edit the photos manually.
There’s also a cycle recording, that records continuously by overwriting the existing files, useful for example in the car when used as dashcam. In the new mode Burst rate you can also take pictures in burst, choosing from 3,5,10 and 20 photos in one second. The Dual Streams , when activated, allows you to record two videos, one in high quality, the other in low quality at 10fps that allows you to review the files streamed in wifi with your phone without the need to download them.
Dimensions: 24,7 x 60 x 41 mm, weight: 58 g.

The SJ5000 + has wifi , which with a special app for phones and tablets allows you to command the cam from an external device , to start and stop recording, to take photos, to watch live on mobile phones or tablets what you are recording. Also, you can playback in your smartphone videos and photos. The configuration values of wifi are in a file in the SD card, and the wifi only works with Micro SD inserted. In addition, to change the configuration, you need to edit the file in this wifi.conf.txt micro sd , for example to change the SSID or password. The range is about 30-40m in open field. When wifi is active the front green led turns on, but it can be disabled from the menu.

Download the app LinkinEyes to pair SJ5000+ plus to the phone.

Another feature that makes the SJ5000+ unique is the large number of accessories included , such as support for the MTB, the underwater case, the clip for the chest, charger, USB cable, stickers for helmets, tripod adapter, various joints, etc. These are a great value added and avoid having to buy a lot of accessories saving a lot of money. These accessories are stronger than the ones included with the SJ4000. And don’t forget that all accessories are compatible with GoPro since they use the same hook, so if you need any additional gadgets you will find them quite easily, and you can use the SJ5000+ as a second cam alongside the GoPro. 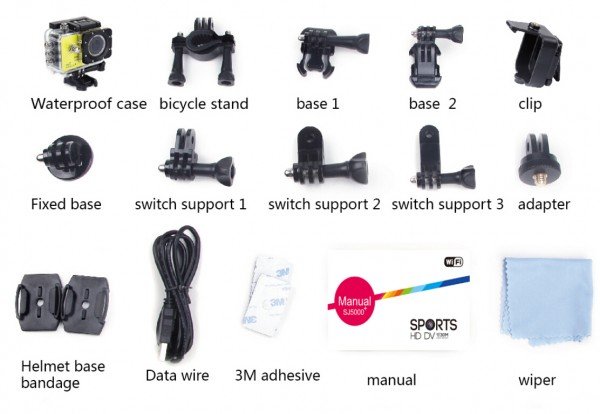 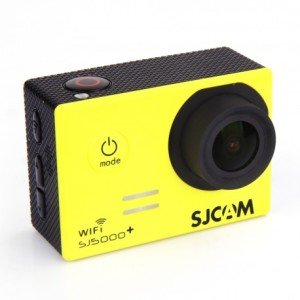 On the front side we can see the MODE button, which is used to turn the cam on and to switch between modes (recording, video playback, photo playback, settings), also if pressed during the recording it makes the video erasable, unless you press the same button again. There are also two horizontal LEDs, the lower lights when the cam is turned on. The upper, green, lights up when you activate wifi.
On the right side, the top button is used to enable / disable wifi, those at the bottom to scroll through menus and to zoom. On the opposite side there are the HDMI and micro USB and the slot to insert the Micro SD card.
On top the button to start recording. If pressed during recording, a picture is taken at 2mpx 1920×1080.

The battery lasts 55 minutes with the screen turned on and the wireless turned on, approximately 1h disabling both. Since firmware 1.7 the battery lasts 15-20 minutes longer.
The maximum framerate for files recorded by SJ5000+ is 24Mbps (1080p 60fps) against the 15Mbps of the sj4000. This means that the files areless compressed and contain more information and have higher quality. Obviously they take up more space on your micro SD card.
On the menu there is the option to choose the microphone volume, to be set to 100% with the case, about 50-60% without the waterproof case, otherwise the sound is too much high and distorted.
In Sj5000 plus there are two new ISO settings in addition to the 100, 200 and 400 of sj4000, namely 800 and 1600 ISO for shooting in low light conditions.
If the camera is turned off by mistake while recording a video, cycled the video can be recovered with the Movie Recovery , if the file size is not too small.

Here you can download some videos shot with SJ5000 plus, we recommend to download them, don’t watch them streaming.

Here there’s a video that describes features and the use of SJ5000+ plus, compared with the SJ5000 wifi (not plus):

And here the SJ5000 plus review by the great Techmoan:

In conclusion we can say that speaking of the hardware this is an excellent evolution of SJ4000 with new quality components (Ambarella processor, also mounted on gopro3+, and 16mpx image sensor from Panasonic) that allows to take good quality 16mpx pictures and 1080p FullHD videos at 60fps or 720p at 120fps allowing excellent slowmotions. You cannot record 4K or 2K videos, but perhaps at these prices would be really too much to ask. In the bottom of the article you will find test footage where you will notice that the video quality is really superior to SJ4000, but maybe not what you would expect given the price difference . Speaking of the audio the difference is big, in favor of SJ5000.

Some test footage shot with SJ5000 plus: