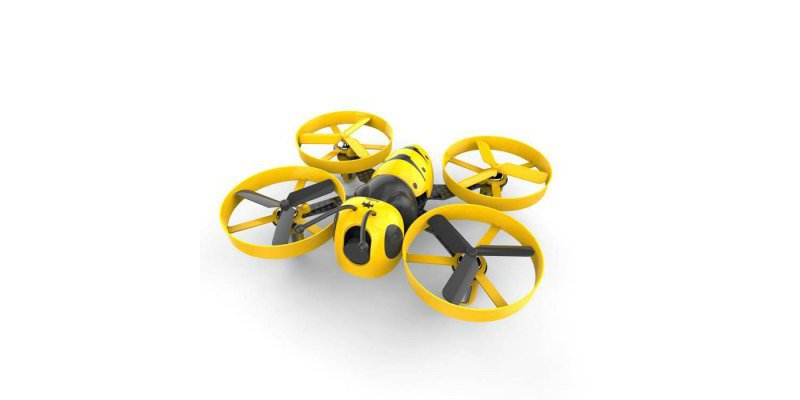 FuriBee F90 is a 90mm quadcopter drone with a special shape of a wasp. It really looks like a giant insect flying in the sky. Its amazing propulsion system can be powered by 30C battery, and its brushed F3 flight controller supports 1 – 3S power supply. More importantly, it is armed with an omnipotent receiver which is compatible with various protocols and has a 5.8GHz FPV transmitter.

There are 3 different version of this drone:

It can be powered by up to three LiPo cells for more lasting performances. It supports signal input of PPM, SBus, DSM receivers.

It is equipped with a buzzer alarm that warns you for low voltage danger and you can set the voltage of alarm.

F90 features MPU6050 Gyro and Accelerometer for more stable flights helping the drone mantaining the balance of the drone, and a Micro USB connector for programming.


The camera has a resolution of 600TVL, and NTSC or PAL one key switch for TV system choice.

F90 features a omnipotent DSM receiver that supports a great number of protocols, like DHT, DFT, DJT, XJT, X9D plus, and X9E protocol and can reach up to 1,5 km outdoor.

F90 features coreless motors, ultralight for mini multicopters, that rotates up to 52.000 times with sufficient voltage input. The 30C discharge ability of the Lipo cells allows the F90 to reach great speeds.

FuriBee F90 has a FPV system with a frequency of 5.8GHz with 48 channels and a power of 25mW, perfect for racing with other drones without loosing the signal.