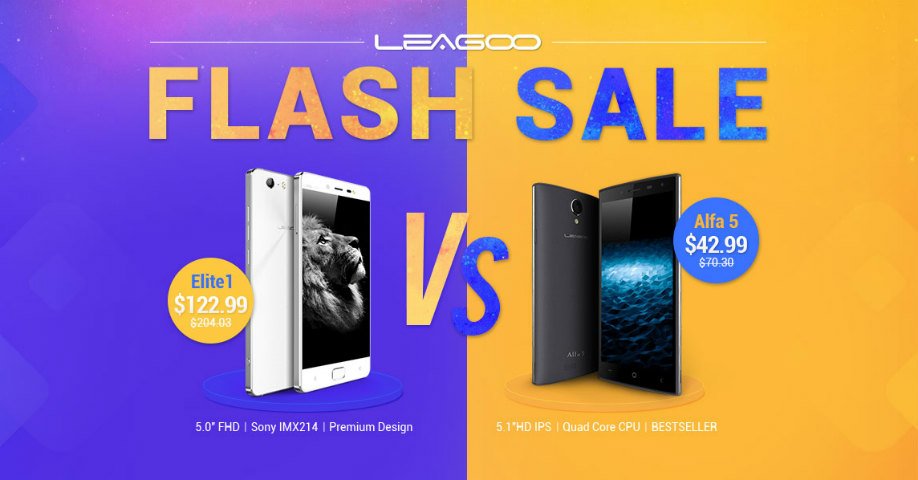 Do you need a new budget Dual SIM smartphone for small money? Don’t miss this flashsale, for just 42.99$ or 122.99$ you will get a 5″, Quadcore CPU cell phone. Let’s see what are the phones on sale:

As we said, it has 3GB of RAM memory, and 32GB of ROM, so there’s enough space for many Apps, pictures and videos.

The rear camera is a fourth-generation 1/3.06-inch Sony 16-megapixel sensor with an impressive f/2.0 lens and dual-LED flash, while the front is a 13-megapixel third generation Sony sensor with f/2.4 77-degree angle lens and a single-LED flash.

When it comes to the design, we can say that it is a very sleek and premium feeling device, which is very well made and it uses metal and glass sandwich construction. Also, it is quite a compact phone due since it carries only 5” display. An all stainless steel metal frame reinforces the build of the device and makes it feel solid, and the glass front and back make it feel more premium than a plastic phone would feel.

Leagoo implemented a physical home button, which also doubles as a fingerprint scanner and it is said to be covered with the saphire glass. It also has two backlit capacitive keys next to it.

Leagoo Elite 1 is a one pleasant surprise, to be honest with you. The company is pretty serious about the presentation and it can be seen from the packaging to the design and the materials used in this phone.

It is a premium looking device that is compact and the Elite 1 has a feature-rich UI, which is running smoothly most of the times, a well-optimized processing package, which leads to a good gaming performance. Also, the phone has a pretty good but not perfect camera.

Leagoo Alfa 5 is a 5.0 inch screen 3G smartphone, with Android 5.1, SC7731 Quad Core 1.2GHz CPU, 1GB RAM, 8GB ROM, Dual Cameras OT. It’s a really cheap smartphone, you can get it for just 42$ with this flashsale. It’s perfect as a second smartphone, or for your kids, or for those who wants a smartphone but don’t want to invest a lot of money on a phone.