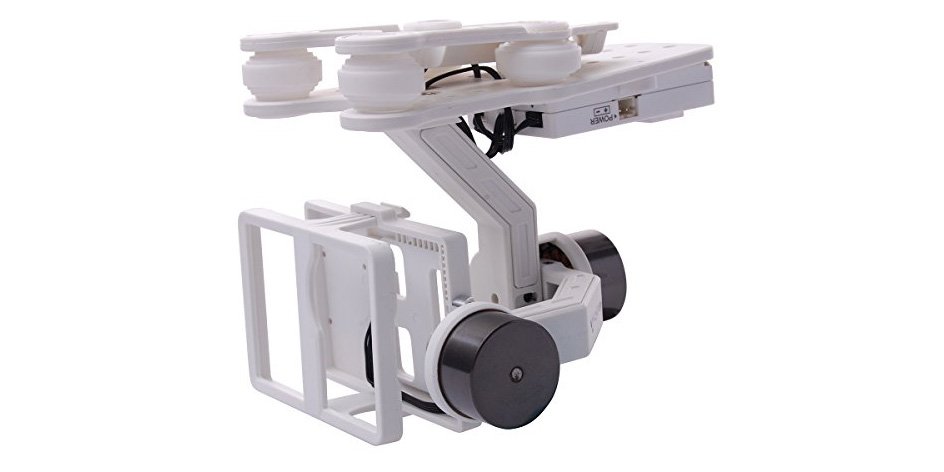 This is one of the most used gimbals for people owning the Cheerson Cx-20 drone, but you can use it with any other quadcopter like DJI Phantom etc., and a gopro.

If you have a drone you’ll probably notice that videos are shaky and unstable. That’s why someone invented gimbals.

With a gimbal mounted on your drones to keep your camera, your videos will be stable, without vibrations and rapid movements.

There are 1-axis gimbals, 2-axis and 3-axis. The best and more expensive one are the 3-axis, they stabilize the cam in every direction.

Gimbals are used in stabilization systems designed to give the camera operator the independence of shooting without camera vibration or shake. Powered by 2 or 3 brushless motors, the gimbals have the ability to keep the camera level on all axes as the camera operator moves the camera. An inertial measurement unit (IMU) responds to movement and utilizes its three separate motors to stabilize the camera.

With the guidance of algorithms, the stabilizer is able to notice the difference between deliberate movement such as pans and tracking shots from unwanted shake. This allows the camera to seem as if it is floating through the air, an effect achieved by a Steadicam in the past. Not limited to handheld shooting, gimbals can be mounted to cars and other vehicles such as drones, where vibrations or other unexpected movements would make tripods or other camera mounts unacceptable.

It weights 160g so it is very light and can be lift by many quadcopters. It has a rechargeable battery. 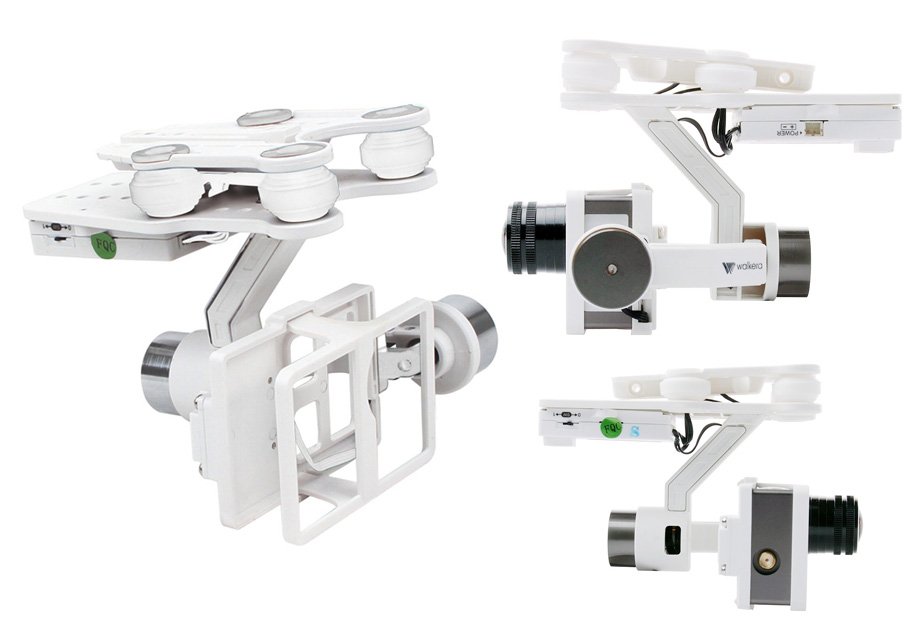 I have a DJI Phantom 2 (V2.0) and wanted a fairly decent gimbal with easy installation. There are a number of Chinese made ones but C&C machined, which means metal and heavy. I found this and thought “Score!”. It’s white, and made of durable plastic. Installation was a breeze. Keep in mind you will either need an adapter plate to attached the slide connector. Otherwise you can screw the top plate right into the DJI with 2 screws. Very snug fit. In the pic I have it attached with the top plate but have an adapter coming. Power is fairly easy as well. I have a 7.4v 850MAH battery and use a bit of velcro to attach to the back ledge of the rear gimbal plate. Took this out to the park and flew some extreme left and right banks, forward and back, and camera stayed real steady. Absolutely uno vibration or jelly affect. Next will be to add the pitch control. Waiting on the servo lead to do that. Even without the pitch control, the cost, including how well it works, makes it a great buy. I would highly recommend.
For the price, you simply can not beat this deal. The Gimbal itself is Lightweight and constructed out of sturdy plastic that seems to hold up well. I have flown with several times and I am impressed. Pitch has awesome range, so much that I had to limit it on my Phantom 1 controller, aka – dialing it in and now the thing works perfect for what I want. Since this gimbal seems to be universal in a sense, on my phantom 1 I had to move the mounting plate back so the battery door could open. I ended up drilling a second hole in the body and it was good to go. A second tip is purchase longer hobby wire the black/white/red with female ends on each end. The one’s it comes with it are entirely too short if you have a Phantom 1. You will also need to purchase a longer power wire with a JS2 connector that has a female end as well. once you have these parts, you only need to connect the power wire to the Aux power wire given to you on the Phantom 1 and then you connect one female end to the Naza (F2) port and the other to the pitch control on the Gimbal itself. Route the wires and your good to go. The trick is calibrating the gimbal using the Naza software. The gimbal setting in the naza software is pre-populated with 1000 and -1000, that means the gimbal can damn near do a 360 LOL. I only needed shots from the front and straight down, so i played around with the numbers real time to get them. after that i was good to go, check it out.